One of my lovely workshop students wrote this about the course he came on!   How to weave a willow chicken Poultry expert Andy Cawthray knows how a chicken should look – but can he recreate one using willow? Share 80 Email Andy’s willow chicken takes up residence in the garden. Photograph: Andy Cawthray As […]

One of my lovely workshop students wrote this about the course he came on!

How to weave a willow chicken

Poultry expert Andy Cawthray knows how a chicken should look – but can he recreate one using willow? 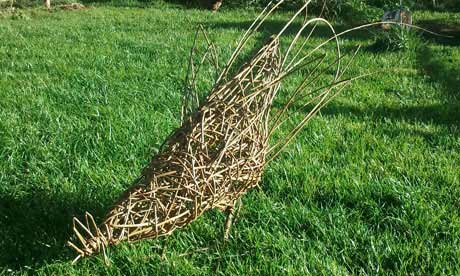 As the main breeding season closes and the majority of the young stock are out on the pasture enjoying a bit of autumnal sun (I hope), I get to cut myself some slack. A well-timed birthday present meant I got to spend a day away doing something a bit different (but still poultry-related).

I’d been caught admiring some willow sculptures of chickens at a green fair earlier in the year. They were made by Juliette Hamilton, who runs willow weaving courses at Arley Hall in Cheshire, not far from my home. Better still, she was running one specifically for weaving a hen or cockerel in September, so my family clubbed together to buy me a day course on weaving a chicken.

I spend an awful lot of time around chickens, handle them constantly, study their appearance and form, understand their behaviour (mostly!), their postures, stances, and plumage configurations – but I know diddly-squat about willow weaving. This is not to say I haven’t attempted it, but that’s been limited to creating obelisk like structures for the runner beans and sweet peas; these tend to fall apart within a week or two, despite my initial bigheadedness that I’ve got it sussed this time around.

I set off early one morning, unsure of whether my fixed view on what a chicken looks like would flex as well as the willow when it came to constructing a bird. I arrived to find Juliette was equally unsure if I’d be picking her up on the anatomical inconsistencies of the sculptures, so in this respect I think we managed to cancel each others’ concerns out.

Juliette’s instructions and guidance were very clear, she took time to explain the basics to those of us in the class who were weaving virgins: it wasn’t long before we were cracking on with the basis of almost all willow sculptures – the ball. My ball wasn’t particularly spherical but I did find myself answering one of the key questions in life; “what came first, the chicken or the egg?”. In my case it was the egg, the rest of the chicken didn’t arrive until much later in the day.

We had the basic shape constructed by lunchtime and it was at that point I started to see the willow whips as feather outlines, which resulted in me adding all manner of saddle hackles, tail sickles and vulture hocks. Fair play to Juliette though, as she said there’s no rules in artistic expression even when there’s a slightly eccentric poultryman in the classroom.

I’m totally hooked on willow chickens now, and after foraging some whips from a local basket weaver I think I could well have a flock of willow chickens occupying a corner of the field. The feed bill will be cheap and there will be no fox or red mite problems, but breakfast eggs might be a thin on the ground.

For more information on Juliette’s work and the courses she runs visit juliettehamiltondesign.co.uk or find her on Twitter as @willowjue.

• This post is part of a regular series on poultry keeping from Andy Cawthray, a self confessed chickeneer who writes for a number of magazines, provides talks & courses on keeping poultry at home and shares his experiences on his personal blog TheChickenStreet.